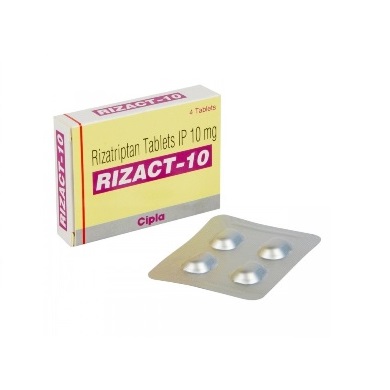 Rizact 10mg Tablet has Rizatriptan as the active ingredient, Rizact 10mg tablet relieves migraine it should be taken
as soon as headache begins.
Rizact works by decreasing the release of certain natural substances in the brain that cause migraine symptoms
and by narrowing blood vessels in the brain to stop pain signals from being sent to the brain. After taking Rizact
10MG one should try to  lie down without light. Try to avoid driving after taking Rizact.
Buy Rizact online from Golden Drug shop and available in various packs and get free shipping.
It is used for severe migraine pains. It blocks release of migraine causing natural substances. The medicine shall be consumed with a glass of water at the first moment you feel the pain.

There are no reviews yet.

Only logged in customers who have purchased this product may leave a review.